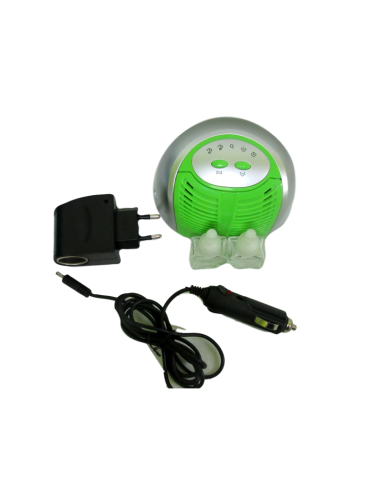 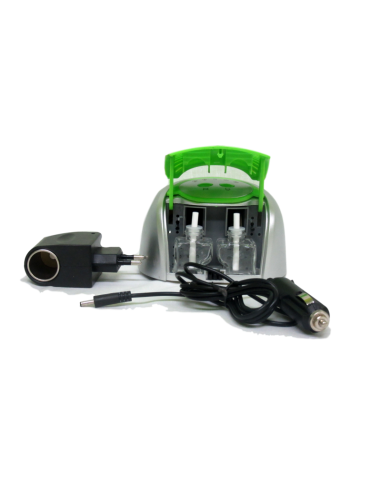 The present ionizer has a double function: a) generate negative ions and b) emit a fragrance into the environment.

Negative ions, also called "vitamin from the air" not only eliminate smoke and dust and clean the air but also improve people's metabolism.

Experiments show that after one to fifteen minutes of being in an odorous environment, the sense of smell becomes insensitive to this smell (this is called adaptation). In other words, after a few minutes people become insensitive to the smell original; This fragrance no longer smells.

This ionizer has a double function:

a) generate negative ions and

b) emit a fragrance into the environment.

Negative ions, also called "vitamin from the air" not only eliminate smoke and dust and clean the air but also improve people's metabolism.

Using this equipment in the car, reduce fatigue, clear the mind and help prevent accidents

1.- remove the anti-evaporation cap from the bottles

2.- fill both with the desired fragrance (about 6 ml)

3.- press on the bottom center of 1 to lift the lid

4.- place the bottles inside according to figure

5.- connect power to (3). The other end to the base of the car lighter or to the 220v adapter that is supplied. The central LED O_ immediately lights up indicating that the negative ion generator is running. The device has started automatically and the 15 ’LED lights up at the same time a LED is lit on the inside indicating which of the two fragrances is emitted. The fans run discontinuously and the bottles alternate with a frequency of 15 ’.

7.- if we press the button (5) we change the duration of the fragrance emission cycle

8.- the interior lamp indicates which of the two fragrances is in operation.

10.- we can disconnect the fragrance emission if we keep the button (5) pressed for a few seconds

11.- To place the equipment on the dashboard of the car, we remove the protective adhesive from (7). We must be careful not to tip over the device as it could spread liquid through the dashboard.

12.- Turn off the power when the equipment is not used. In some models of cars there is power in the lighter of the car even with this one stopped.

13.- if you do not remember the operation of the buttons (4) and (5) you can leave the equipment in standard operation

14.- when the fragrance is finished it can be filled

15.- the negative ions generated by the equipment adhere to: dust spots, bacteria, viruses, odors, etc. present in the environment and makes them precipitate to the ground, that is why after prolonged use of the equipment we can find dust in the housing of the equipment. It is cleaned with a slightly damp cloth. Inside you can remove dust by blowing.

Fragrance emission time: can be changed with (5)

Negative ions: they are generated continuously

No reviews
Tap to zoom

Save products on your wishlist to buy them later or share with your friends.